Duodenum, the first part of the small intestine, which receives partially digested food from the stomach and begins the absorption of nutrients. The duodenum is the shortest segment of the intestine and is about 23 to 28 cm (9 to 11 inches) long. It is roughly horseshoe-shaped, with the open end up and to the left, and it lies behind the liver. On anatomic and functional grounds, the duodenum can be divided into four segments: the superior (duodenal bulb), descending, horizontal, and ascending duodenum.

A liquid mixture of food and gastric secretions enters the superior duodenum from the pylorus of the stomach, triggering the release of pancreas-stimulating hormones (e.g., secretin) from glands (crypts of Lieberkühn) in the duodenal wall. So-called Brunner glands in the superior segment provide additional secretions that help to lubricate and protect the mucosal layer of the small intestine. Ducts from the pancreas and gallbladder enter at the major duodenal papilla (papilla of Vater) in the descending duodenum, bringing bicarbonate to neutralize the acid in the gastric secretions, pancreatic enzymes to further digestion, and bile salts to emulsify fat. A separate minor duodenal papilla, also in the descending segment, may receive pancreatic secretions in small amounts. The mucous lining of the last two segments of the duodenum begins the absorption of nutrients, in particular iron and calcium, before the food contents enter the next part of the small intestine, the jejunum.

Inflammation of the duodenum is known as duodenitis, which has various causes, prominent among them infection by the bacterium Helicobacter pylori. H. pylori increases the susceptibility of the duodenal mucosa to damage from unneutralized digestive acids and is a major cause of peptic ulcers, the most common health problem affecting the duodenum. Other conditions that may be associated with duodenitis include celiac disease, Crohn disease, and Whipple disease. The horizontal duodenum, because of its location between the liver, pancreas, and major blood vessels, can become compressed by those structures in people who are severely thin, requiring surgical release to eliminate painful duodenal dilatation, nausea, and vomiting. 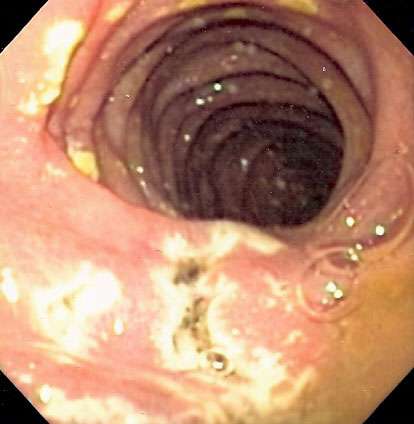