The pancreas is a gland, about six inches long, located in the abdomen. It is shaped like a flat pear and is surrounded by the stomach, small intestine, liver, spleen and gallbladder. The wide end of the pancreas on the right side of the body is called the head. The middle sections are the neck and body. The thin end of the pancreas on the left side of the body is called the tail. The uncinate process is the part of the gland that bends backwards and underneath the head of the pancreas. Two very important blood vessels, the superior mesenteric artery and superior mesenteric vein, cross behind the neck of the pancreas and in front of the uncinate process. The pancreas is both an exocrine gland and endocrine gland and has two main functions – digestion and blood sugar regulation.

The Pancreas and Digestion

The main pancreatic duct connects with the common bile duct, which carries bile from the gallbladder, and together they connect with the duodenum at a point called the ampulla of Vater. Here, bile and pancreatic enzymes enter the duodenum to aid with the digestion of fats, carbohydrates and proteins. 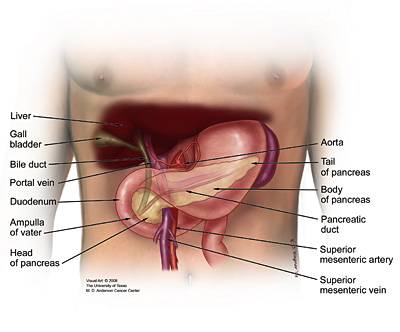 The endocrine cells of the pancreas produce hormones. Hormones are substances that control or regulate specific functions in the body. They are usually made in one part of the body and carried through the blood to take action on another part of the body. The two main pancreatic hormones are insulin and glucagon. Islet cells are endocrine cells within the pancreas that produce and secrete insulin and glucagon into the bloodstream. Insulin lowers blood sugar levels while glucagon raises blood sugar levels. Together, these two main hormones work to maintain the proper level of sugar in the blood.